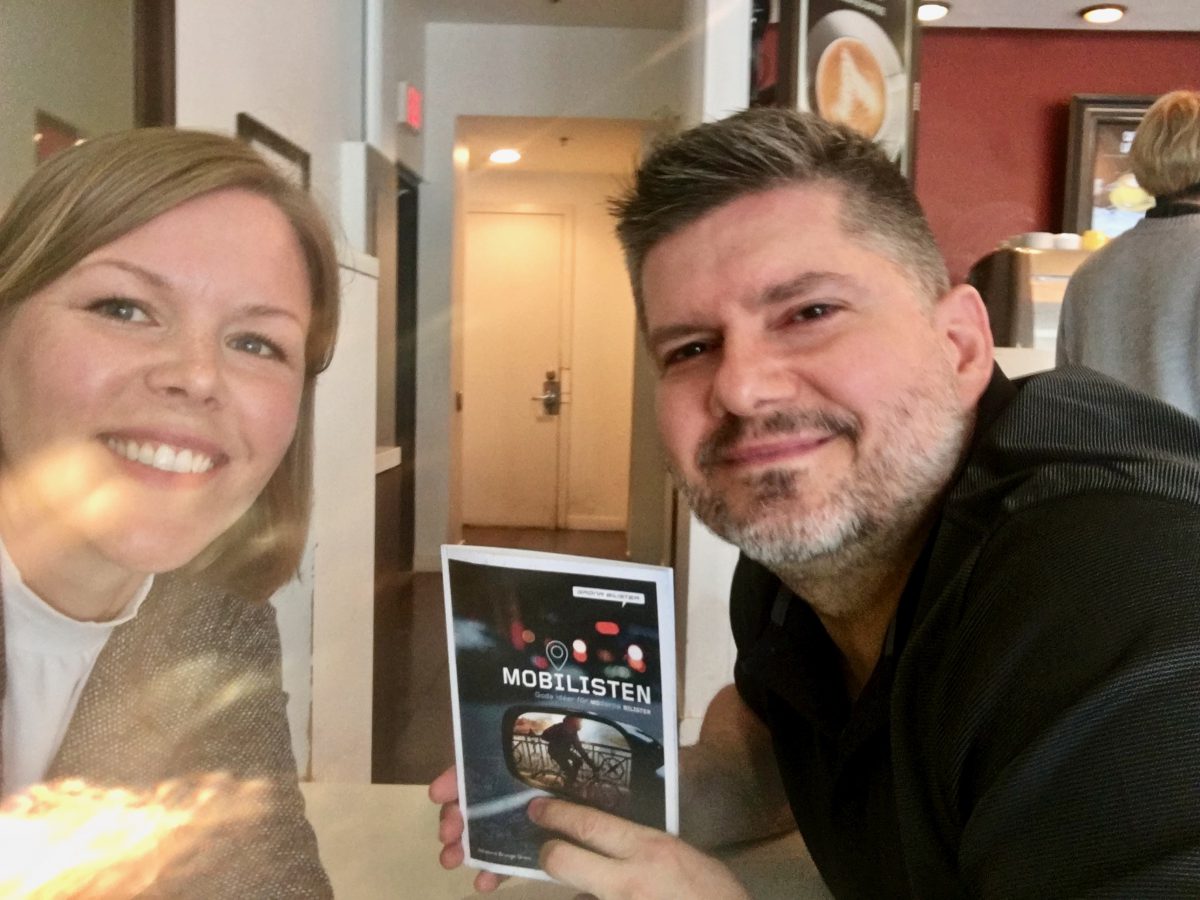 Can smart urban design transform motorists to ”mobilists”? Johanna Grant, chairperson of the Swedish Association of Green Motorists and author of the mobility guide “the Mobilist” (in Swedish “Mobilisten”), recently spent a few days in what is ranked as one of the world’s most liveable cities, Vancouver, Canada. While there she had the opportunity to interview Brent Toderian, city-maker, mobility expert and former Director of Vancouver City Planning.

What constitutes a city developed for people instead of cars?

A city designed for people shrinks the scale to experiences on foot, 5 km/h being a comfortable speed of a pedestrian. It’s first about reasonable livability, being possible to be a citizen on foot, and then it goes beyond that to this concept of “delight”.

A city designed for people, at a basic level, works for people who choose not to use a car for everything. Then it goes beyond that. It should be a city that’s delightful for people, especially when they don’t choose a car. So the design facilitates the better choices, the rational decision to choose walking, biking and public transit, not because of ideology rather because it’s just the better choice.

…and if you live in a smaller town?

I think the principles of multimodal design are scale neutral. Small towns are easier to make walkable, bikable and even transit friendly, in some cases, because they are smaller and can be inheritable walkable. They often don’t have the levels of traffic on the roads that even need separated bike infrastructure. You can just ride your bike reasonable safely, in a well-connected grid in a small traditional town.

How can a behavioral change be achieved when the car is such a strong norm?

That mindset is an extension of the so called “American dream”. That didn’t exist until America sold that to the market place and it was a global market place they sold it to. As surprised as I am that North America made those mistakes, I’m always even more surprised when Europe copies the worst mistakes of North America. But ultimately, it becomes a self-fulfilling prophesy, if you think you want a car dependent lifestyle, that’s what is built. The result is a car dependent lifestyle. Even if you wanted to do something different, once you’re living in a car dependent place, you need the car. It’s hard to push against the rational observation that you need a car for everything.

My starting point to these conversations is always: if you don’t want to be car dependent, stop designing and building car dependent places.

It’s hard to have a conversation about multimodal citizens when we keep building car dependency. Let’s be honest, we’re still building car dependency as the norm more often than we build anything else. There’s no reason for that, there’s no law, there’s no requirement… there’s not even any logic to it. And the numbers all show that it’s expensive, it’s unhealthy and it’s counterproductive to our future, relative to things like climate change. So there is nothing rational about it, but we do it largely due to a market momentum and either a lack of understanding of the consequences or a resistance to an understanding of the consequences. People don’t want to know the consequences if they don’t really want to change.

Is that the biggest challenge to building a multimodal city?

It starts with land-use. As we say here in Vancouver, “the best transportation plan is a great land-use plan”. I plan places that includes the mobility side obviously. In most cases we got the land-use so wrong that even if you spent an awful amount of money trying to build an ideal multimodal transportation infrastructure, it would fail because your land-use is all wrong… or it would at least be limited in its success. It might not completely fail, but you’ll spend billions, with a minimum success at best, whereas if you manage to get the landuse right, which is about the densities, the mixes of uses, the clustering and the arrangement of density relative to things like transit ridership and other goals, if you do those right, your multimodal model stands a chance. It still needs smart infrastructure… but it stands a chance. You can’t do it otherwise. Land-use is the chicken and transportation is the egg. The chicken in this case does come before the egg.

…so this is the way to promote more motorists to become mobilists?

Well the problem is that even if you succeed with better designing of our environments, you still got to work on the marketing part of it. The shifting of the mindsets. The marketing has the benefit of having a profound truth associated with it. The costs and consequences of doing what we have been doing are so obvious now, it’s amazing that we’re having a hard time marketing it because the truth is on our side. We’re just too often bad at communication, branding ideas and marketing.

The other observation is that we don’t have time to wait for the land-use to be perfect.

We have to be marketing and branding these ideas in the meantime. And even though there are going to be places where car dependency makes it probably less worth yourwhile, there are urban places where we can do better. In a regional pattern there are places where it makes sense, and places where it makes less sense. The low hanging fruit is the term. Not all suburbs are a write-off, some of them can be retrofitted relatively easily with rapid transit, others can be retrofitted through infill land-use. I do believe there are such things as multimodal suburbs, we just haven’t been building them. But certainty, in the context of the urban portions of our region, we can do a lot with infill and our systems and our visions and our processes should all be facilitating that kind of change. To a certain extent, that’s the low hanging fruit. In the meantime, you may not be going out fixing all the existing suburbs, but for GOD’s sake, stop building bad ones.

How do you get around?

Well, my neighbourhood is a 100 transit score neighbourhood and a 98 walk score neighbourhood. I have three grocery stores within two blocks of my house. People often ask me if I bike to work and I say, why would I bike to work, I walk to everything. Vancouver’s priority is actually walking first, then biking, then transit, then goods movement and then the car… and that is kind of how I live my life. Although I probably use transit more often than I bike, then I don’t have to worry about where I lock my bike. But I am a multimodal citizen…

Sure. Because I probably walk more often than anything, I take transit probably second, we take the bikes more for recreation, but that it just because walking and transit is so easy. We are members of two car share companies and we take taxis whenever we need a car… which are relatively available, the car shares in particular because we have the best car share system in North America here in Vancouver. So I believe in the best tool for the job approach. You asked me how I get around? It depends on where I’m going, how fast I need to get there and what’s the best tool for the job.

But we designed this environment to make that possible. This environment facilitates that life style, but I also chose this place to live because I wanted that lifestyle. The problem is that we don’t have enough of this type of choice. This is a rarity and you have to pay a premium to live here, whereas the car dependent suburbs are more the norm and they are often perceived as more affordable. I say perceived because we rarely factor in things like transportation and energy costs.

Lastly, what inspires you?

Cities that want to do better no matter where they are in their learning curve or in their change curve. The cities that inspire me are the ones that have decided to change and they are struggling with the why. I find every city has things that they do well and things that they don’t do well. You can learn from any city. Having worked in all the parts of the world, I expected the differences to be more obvious. What I find is that the similarities are what stand out. Most cities are struggling with the same issues because geometry is the same anywhere in the world. Even things like carculture is surprisingly uniform in different parts of the world. Cities are more alike than not. What differentiate the cities that are doing remarkable things is an attitude what I call “will and skill”. They have the will to do something different and are trying to build the skill to be able to do it well.

Interview by Johanna Grant, chairperson of the Swedish Association of Green Motorists 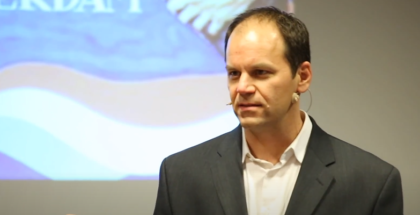 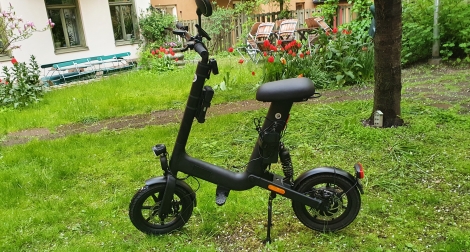