James Brooks is the director of the campaign group Think Beyond the Pump, based in Oakland, California. He promotes so called ’warming labels’ on gas pumps, alerting motorists of the climate and health risks associated with burning fossil fuels.

On January 27th 2020, the City Council in Cambridge, MA, decided to put climate and health warning labels on all fuel pumps in the city, resembling the warning labels found on cigarette packages. Cambridge will be the first place in the world with such warning labels.

James Brooks has been campaigning for such labels for many years, and inspired Jan Devereux to introduce the bill as Vice Mayor in Cambridge. The Swedish Green Motorists therefore asked James a few questions about the recent decision.

What is the main significance of this decision?

There are four components:

1) It marks a culmination of 6 years of debate on whether a warning label at a gas pump outlining the latent public health and climate effects from gas combustion, is justified. By it’s very nature, this type of approach generates controversy (on both the left and the right in our current political climate regarding the science of climate change in the U.S.). The 1/27 action in Cambridge gives the idea more political legitimacy.

2) The Constitutional aspects of the legislation can now proceed here in the U.S.. All the cities that debated this scheme in the last 6 years; Berkeley, San Francisco, Santa Monica, Newton, MA and Seattle, WA; all paused because they were ultimately afraid to take on the power of the fossil fuel industry.

3) This is not just about putting a warning label on gas pumps and calling it a day. This legislation encompasses a multimedia campaign about the climate and public health harms from fuel combustion. The legal precedent of this legislation in the United States could have a reverberative effect on how the fossil fuel industry can market its product to the public. In addition, transparency laws/regulations could impact/change how utility bills are communicated, what comes with a purchase of a new vehicle, airline tickets, or buying appliances (and other stuff I can’t think of). All could be required to disclose to the public, the health and climate harms from ff purchases.

4) The State of Massachusetts was the first in the U.S. to sue the Environmental Protection Agency in classifying CO2 as pollutant and harmful to public health- and therefore subject to government regulation under the Clean Air Act. Buried in Federal regulations, CO2 from the combustion of fossil fuels, is considered harmful to humans due to MA’s actions. This is the next step in my view.

What are the prospects that more US cities adopt similar legislation?

I think this legislation in conservative regions of the country, with powerful, fossil fuel capture of government, could be a distinct challenge in terms of this idea spreading nationally. Also, progressive cities in the U.S. may remain skeptical as to its effectiveness, as well as to the constitutional challenges it poses (the hope is that Cambridge will reengage the City of Berkeley on the West coast to issue a final vote in favor of ’warming labels’, and finish up what they started here!).

What are the prospects that similar legislation is adopted at the state or federal level?

I have spoken last year to MA State Representative Jon Hecht on the idea for the State of Massachusetts implementing this scheme statewide if one of the cities adopted the measure. 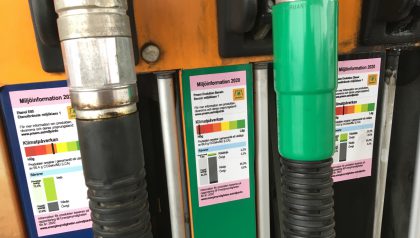 James Brooks – Director of Think Beyond the Pump