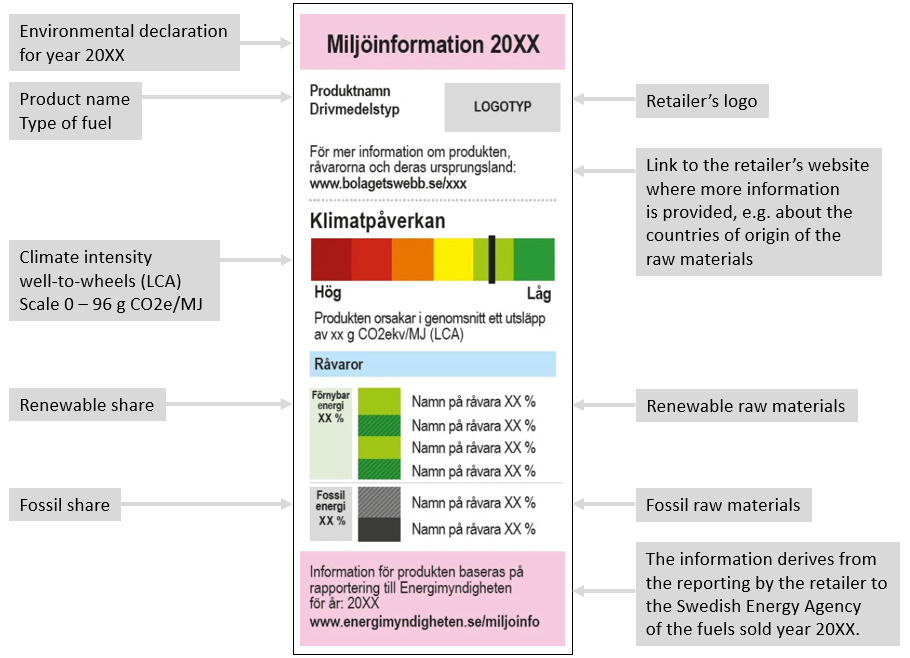 On August 9, 2018, the Swedish government passed an ordinance that forces fuel retailers to inform consumers on the dispenser about the climate intensity of their fuel, and also about its origin. After a series of delays, caused in part by protests from the EU commission, the eco-labels will be mandatory from October 1, 2021.

Suppliers of fluid or gaseous transportation fuels should provide overall information on the eco-label at the filling device about the climate intensity of the fuel, together with its renewable share and raw materials. Eco-labels of this kind should also be present at the charging points for electric vehicles run by such retailers. The declared information is specific to a given fuel product sold by a given retailer a given year.

More detailed sustainability information of the same kind should be offered at the website of each retailer. This includes information about the countries of origin of the raw materials. According to the original government plan, these countries of origin would be disclosed at the filling device as well. However, The EU-commission complained, arguing that it ”represents a measure capable of hindering imports of fuels produced in other Member States”, and thus goes against the free trade rules of the inner EU-market. This is questionable, but the Swedish government nevertheless backed off.

Exceptions from the requirement to put eco-labels at the fuel dispenser are allowed for small filling stations which sell less than 1 500 m3 fluid fuel, and less than 1 000 000 m3 gaseous fuel per year.

– We have been campaigning for eco-labels on fuel dispensers since 2013, says Marie Pellas, chairperson of the Swedish Association of Green Motorists. Therefore we are very happy that they are becoming mandatory now.

The disclosed sustainability information should derive from the annual reporting to the Swedish Energy Agency by the retailers about the fuels they sold the previous year. The statutes of this reporting were originally formulated by the EU. To avoid confusion among consumers it should be made clear on the eco-label that the information refers to the sales of the fuel in question by the retailer last year, rather than the fuel drops that are poured into the car here and now. This is the same system that is used on the declaration of origin shown on Swedish electricity bills, and derives from a directive from the EU.

In 2017 a climate law was passed by the Swedish parliament with wide political support. It requires that the emissions of greenhouse gases from the transport sector in Sweden should be reduced by 70 percent from 2010 to 2030. The fuels used for road transport produce 30 percent of all greenhouse gas emissions in Sweden. To reduce the climate impact of these fuels is therefore essential in Sweden’s efforts to combat climate change.

– When the climate intensity of the fuel is clearly visible at the very moment we pour it into our car we will feel our personal responsibility, says Per Östborn, campaign manager at the Green Motorists. The released consumer power will help reduce the carbon footprint of these fuels.

– But the responsibility cannot be put as a weight on the shoulders of consumers alone, says Per Östborn. We must also have economic instruments of control that benefit the best fuels and regulations that prohibit the worst. Cap and trade mechanisms may also be effective.

There are more sustainability issues with transportation fuels than their carbon footprint. The extraction of raw materials for fuels may harm nature and people. It is unfortunate that the renewable diesel used in Sweden is heavily dependent on palm oil and its derivatives, since these raw materials contribute to the devastation of rainforests in Southeastern Asia. The socio-economic sustainability of the crude oil that is used to refine petrol and diesel depends heavily on its country of origin.

– We are therefore happy that the raw materials and their countries of origin are disclosed, says Per Östborn. To avoid putting it on display the retailers will try to keep away from fuels that contribute to the devastation of rain forests or fatten brutal, authoritarian regimes. If they nevertheless import such fuels consumers will turn their backs on them.

In the end, it is not enough to put eco-labels on Swedish fuel dispensers alone. To affect the global fuel market in the slightest way, eco-labels must be put on fuel dispensers in many countries more. The Swedish system is constructed in such a way that all member states of the EU can, in principle, introduce the same kind of consumer information tomorrow.

– We will do our best to inspire more countries to follow the example of Sweden, says Marie Pellas.

As Minister for the Environment, Karolina Skog passed the eco-labeling bill in 2018. She encourages more countries to follow the Swedish example.

The mandatory eco-labels and the sustainability information to be provided by the retailers on their websites are specified by law SFS 2011:319, government ordinance SFS 2011:346, and regulations STEMFS 2021:1 and STEMFS 2021:5 by the Swedish Energy Agency (in Swedish).

The fuel companies Kraftringen and E.ON have already introduced eco-labels on a voluntary basis.

A history of the Swedish eco-labels on fuel pumps is provided here.

More information about the Green Motorists is found here.

Per Östborn, Campaign manager, The Swedish Association of Green Motorists

This press release was first published in August 2018. It has been updated in spring 2021.