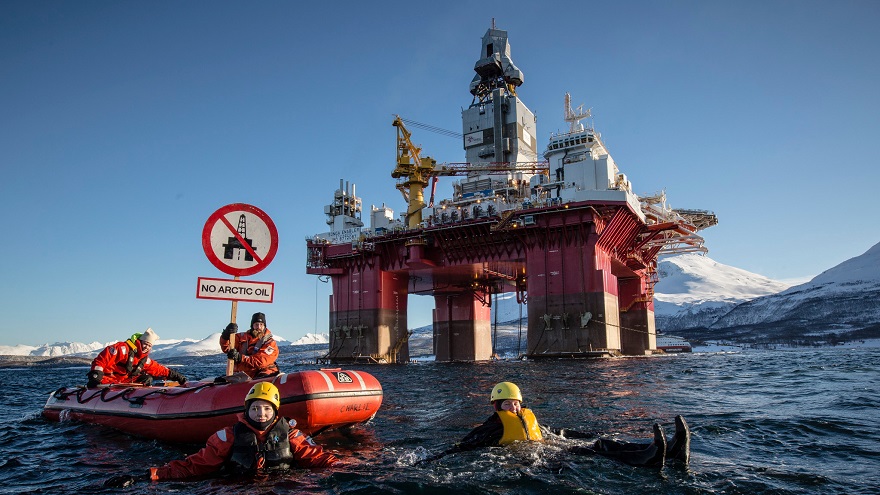 In 2011 the EU commission proposed that all fossil raw materials to petrol and diesel should be traced, but the proposal was suppressed. Our politicians must address this issue anew – and this time they must take us all the way to the source of oil. Otherwise really foul oil will find its way to our fuel stations without us knowing it, writes the Swedish Association of Green Motorists.

Image: Greenpeace protests against the plans by the State-owned Norwegian energy company Equinor (previously Statoil) to drill for oil in the Arctic. Photo: Will Rose/Greenpeace

Shortly before the general election to the Swedish parliament in September 2018 the government decided to introduce eco-labels that disclose the origin of the fuel on the pump. But today, only those fuel companies which buy and refine crude oil by themselves know for sure where the oil is coming from. If the traceability is not improved we are going to read “origin unknown” on the eco-label all too often when we fill our car.

That would be unfortunate. To be able to secure that petrol, diesel and natural gas cause as little damage as possible during the last decades of the fossil era we have to be given the chance to cast aside the worst alternatives.

These foul alternatives are gaining terrain, unfortunately, as the easily accessible oil and natural gas dry up. Natural gas extracted by means of fracking in the US is on its way to Sweden, despite the fact that fracking causes substantial environmental damage. When oil companies drill for oil in the Arctic or in the deep ocean the risk for accidents and oil spill increases. The explosion of the drilling rig Deepwater Horizon i the Mexican Gulf is an example of the latter. Traceability is necessary to be able to say no to all of this.

To extract oil from unconventional sources like tar sands, oil shale or coal is not better at all, because it requires a lot of energy and causes large emissions of greenhouse gases. The extraction of tar sands in Canada also devastates nature.

The climate intensity of petrol made of tar sands is 15 percent larger in well-to-wheels perspective than that of petrol made of conventional crude oil, according to the methods of calculation used by the EU. When oil shale is used as raw material the increase of climate intensity is 41 percent, and when coal is used the increase is no less than 85 percent. The choice of raw materials apparently makes a big difference. We have to be given the chance to cast aside these unconventional raw materials.

There is also a big difference between conventional crude oil with different places of origin. The upstream greenhouse gas emissions (well-to-tank) of petrol made by crude oil may be everything between 15 and 40 percent of their total emissions (well-to-wheels), according to a recent study published in Science.

In this study the emissions (well-to-refinery) during the extraction of the crude oil were estimated for all major oil fields in the world. It turned of that they are responsible for 5 percent of the overall global emissions of greenhouse gases. Without traceability it is impossible to steer the market so that this entry in the emission budget decreases.

There are differences in the refinery step as well. The fuel companies Preem and St1 have come a long way to reduce the climate impact of their refineries in Sweden. However, the absence of a system to trace all fossil fuels implies that all petrol and diesel within the EU are assigned the same climate intensity regardless where they are refined. The incentive for others to follow the example of Preem and St1 diminishes.

Authoritarian regimes can use the oil to cling to power and threaten the world around them. Russia is Sweden’s largest import country for crude oil. There is a clear correlation between the military budget of Russia and its oil income. Without traceability it is impossible to avoid oil that fattens despots or ruins the living conditions of people around the oil or gas fields.

Apparently, there are many good reasons to trace all fossil fuels. Why is it not done, then?

In 2011 the EU commission proposed that the fuel companies should report all raw materials of the fossil fuels and their countries of origin at the level of mass balance. Fossil fuels with different origin may then be blended, but there has to be a system in place that keeps track of the amount of fossil fuel of different origin that enters and exits each step in the production and distribution chain.

A report commissioned by Transport & Environment demonstrated that it is possible to construct such a system. Because of the needs of the industry itself a large amount of documentation already accompanies each batch of oil that is bought and sold. Since the quality of the oil depends on its origin the refineries need to know, for example, the oil field from which the oil that is fed into the process is coming.

The administrative burden to achieve full traceability is therefore limited. All that is needed are new data entries in a documentation that already exists. If the entire cost of a system for traceability was put on the consumer, the raise in price at the fuel station would be less than a thousandth of a dollar or euro, according to the report.

Even so, the oil industry managed to convince almost all member states in the EU that it would be too complicated to produce information about the origin of all fossil fuels. The proposal by the EU commission never came true.

Another setback occurred in 2014, when a proposal by the EU to specifically trace and label fossil fuels made of tar sands was withdrawn after massive lobbying by Canada and oil companies with heavy interests in tar sands.

The contrast is stark when we compare the situation to that for biofuels. They were made traceable at short notice in connection to the adoption of the renewable energy directive in 2009. According to the new version which is about to come into force, not only shall the origin of the renewable raw materials be reported to national agencies, but also the entire chain of refinement and distribution. In addition, each fuel company within the EU will be forced to disclose the origin of their biofuels to the public.

In order to explain the difference in political turnout between fossil and renewable it is enough to note that the oil industry is strong and defends its market. The biofuel industry is weaker and tries to get access to the market. It is in their interest to trace their products to be able to show that they are produced in a sustainable way. Fossil fuels can never be sustainable, and it is in the interest of the oil industry to cover up the tracks.

Politics is will, said the former prime minister of Sweden Olof Palme. If our politicians really want it, the fossil fuels can become traceable equally fast as the biofuels became traceable. The Green Motorists ask our Swedish politicians to

The National Agency for Public Procurement already recommends general demands for traceability during public purchase of transportation fuel. Such demands are therefore realistic.

We have to get rid of fossil fuels in order to save the climate. Nevertheless we favour them by making fewer demands on fossil fuels than on renewable fuels. This must come to an end. 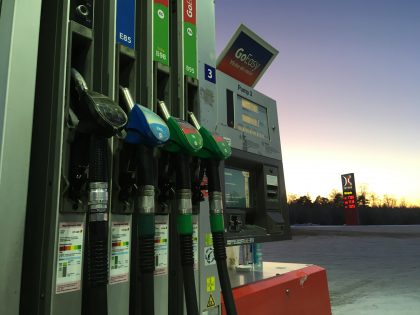 Time to find the source of oil