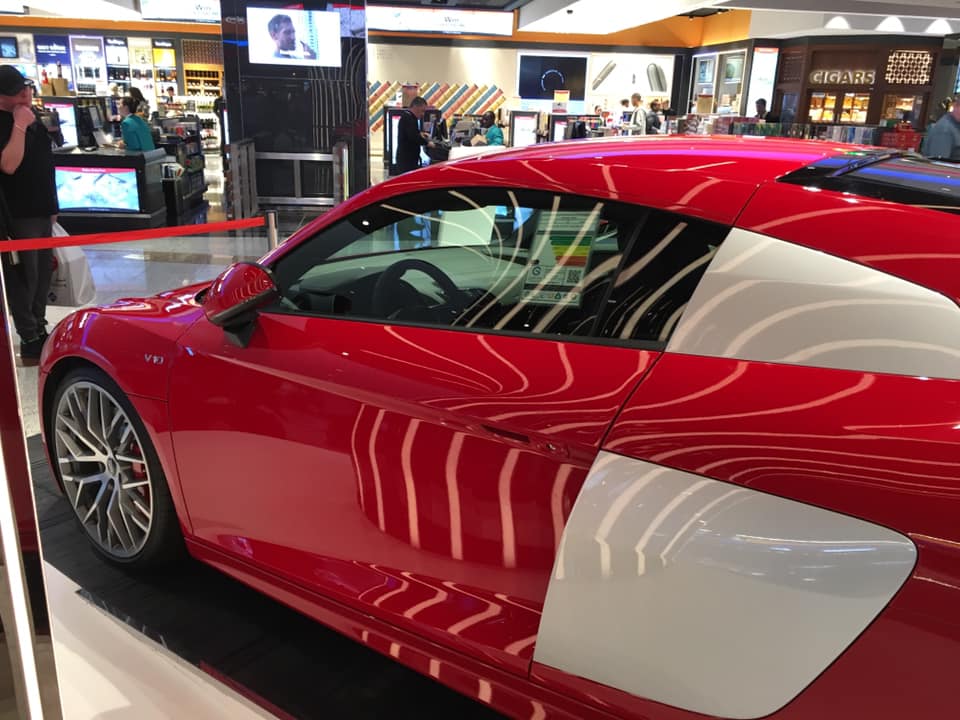 Half of the member states in the EU put energy labels on new cars just like on fridges, but Sweden is not one of them. Even in the oil rich Emirate of Dubai they disclose the fuel consumption and emissions on a sticker in the car window, which is not allowed to be removed by anybody else than the buyer. Energy efficiency and emission control are apparently more important to the sheikhs of Dubai than to the political leaders of Sweden. We must act now, or become worst in class.

Image: Even the Emirate of Dubai puts energy labels on cars. Why is it not yet done in Sweden? Audi R8 Coupé gets the grade “Very poor”. Photo: Jesper Johansson

A detailed proposal for energy labels on cars was presented in 2013 in the official report Fossil free road transport (Fossilfrihet på väg), commissioned by the Swedish government. The idea was to use the consumer power to increase the energy efficiency in the vehicle fleet in order to minimize the volume of renewable fuels needed to achieve the national goal that Swedish road transport should be nearly fossil free in 2030.

Up until now, our politicians have ignored this proposal even though nothing prevents its realization. An EU directive from 1999 explicitly supports such labels. Sweden can lean on all the countries that have already introduced environmental and energy labels on cars, in Europe as well as on other continents. The American system is particularly ambitious.

– If our politicians want to release the consumer power among the car buyers they can do it today, says Martin Prieto Beaulieu, Secretary General of the Green Motorists. The only possible reason why they have not done it yet is that they have not wanted to, for some reason.

According to the proposal in the official report, the energy consumption per unit distance should be graded with coloured bars in the same way as on fridges and other appliances. To avoid that all electric cars are placed in the best class, the energy consumption is used as the raw data rather than the CO2-emissions from the exhaust pipe. In this way electric cars are also allowed to compete with energy efficiency. The Green Motorists thinks this is wise.

– Sometimes not even the general agents can say how much electricity is consumed by their own plug-in hybrids when they are used as electric cars, or how much fuel is consumed when the battery is empty, says Per Östborn, project manager for Green Motorists’ Green Car of the Year competition. Yet these figures can be found in the type approvals. This makes it clear that sharper rules for consumer information about cars are needed.

– The label must also tell black on white whether the car is dependent on fossil fuels, emphasizes Martin Prieto Beaulieu. It should be made clear if the vehicle can run instead on electricity, or if it is approved for ethanol E85, methane, renewable diesel HVO, or hydrogen. There should be a resistance to buying a new car that have to be filled with fossil petrol or diesel. By the way, the Swedish politicians should put an end to the sale of such cars already during their present term of office. These fossils should be buried for good.

– Sweden will be the first country in the world to put eco-labels on fuel pumps, and we are therefore best in class, says Johanna Grant, chairperson of the Green Motorists. When it comes to eco-labels on cars we have fallen way behind, on the other hand. We may become worst in class if the politicians do not wake up now.

The proposal by the Green Motorists for eco-labels on vehicles

A standardized eco-label should be placed in the window of all new cars and light trucks, in all advertising, and on all web pages of the general agents. An initial version of the label should include:

At a later stage, a more elaborate eco-label should also include the climate impact and the use of raw materials during vehicle production.

A more elaborate eco-label including data from the production phase is particularly important when it comes to electric vehicles, where the assembly of the battery gives rise to large greenhouse gas emissions. However, such an eco-label requires a standardized method for life cycle assessments for vehicles, which is still missing.

Many car manufacturers already make their own life cycle assessments, but data from different manufacturers are not entirely comparable. Starting from 2018, the Green Motorists therefore employ our own model that depends only on the power train and the vehicle weight in order to compare the climate impact during the production phase for all models that we nominate to our competition The Green Car of the Year.

Sweden should learn from other countries when we design our own eco-labels for vehicles. In 2016 the EU commission presented an evaluation of directive 1999/94/EC, which governs consumer information about the emissions and fuel economy of cars. Here we list some conclusions.

The European Automobile Manufacturers’ Association (ACEA) recommends that the Car Labelling Directive is revised once the transition to the new test cycle WLTP has been completed.

The economy and eco-label that shall be placed in the window of all new cars in the US. In contrast to the European labels it contains compulsory information about the emission of air pollutants via a smog rating.

Impact of eco-labels on fuel dispensers

About time to put eco-labels on new cars in Sweden